EYES are one of the major sense organs of our body and are responsible for sight. Hence, basic knowledge and regular care of eyes is extremely essential for healthy maintenance of this delicate organ, to ensure proper functioning.

To know about anything abnormal, it is always important to first know the normal. Therefore, it is of paramount importance to know about the normal morphology, brief anatomy and physiology, i.e. the mechanism of functioning of the eyes.

After discussing the basics of eye physiology, we shall discuss the different symptoms, diseases which lead to defective sight, preventive modalities and cure which are required to avoid any damage to the eye.

MORPHOLOGY AND ANATOMY OF NORMAL EYE

The Eyes are present in pair, i.e. right and left, and are located below the forehead and above the nose at the median vertical line of our face, dividing our face and body in two equal halves, right and left.

When viewed from the sides, they are seen to be present on the face in a concave manner and the external visible parts include mainly the eyelids (covering the eyes) and eyebrows (which cover and protect the eyes from any harmful hard & pointed objects, dust, germs etc. which are present in the air).

Additionally, the tears, which are produced by the lacrimal glands and are secreted from inside of eyes, also play a significant role in removing the dust particles and infection agents.

It is essential to understand how our eyes work to better understand the symptoms, associated diseases,  their cure and preventive actions.

As we know that the working principle of an Eye is quite similar to that of a Camera. The change of diameter of pupil is inversely proportional to the intensity of incoming light.

The eye is internally made up of 3 layers. The outermost layer is called Fibrous tunic, composed of Cornea and Sclera, the middle layer is known as Vascular tunis, consisting of Choroid, Ciliary body & Iris and the innermost layer is called Retina which is oxygenated from the blood vessels of the choroid at posterior side and by retinal vessels at anterior side.

The spaces in eye at anterior side is filled with a fluid, called Aqueous humour and the spaces between cornea and lens is filled up by another jelly like substance, called Vitreous humour. The former is a clear watery fluid and it is found in 2 areas: in anterior chamber between cornea and iris and in posterior chamber between iris and lens. The lens normally suspends  with the ciliary body by a ligament, called suspensory ligament or, Zonule of Zinn. This ligament is composed of numerous fine transparent fibers which transmit muscular forces to change the shape of the lens for focusing purpose. The vitreous body is composed of water and proteins more viscous than aqueous humour.

The cornea of eye supported by a tough white sac, called Sclera. The incident light ray begins to travel from the surface of the cornea.

The smoothness, transparency and shape of the cornea is helpful to form an image on retina through lens. The cornea have 3 main layers viz: 1st the thin and outer most layer of easily regenerated cells, called epithelium, then, 2nd or, middle layer, also called Bowman’s layer which is thickest in size and is composed of Collagen fibers which protects corneal stroma (supportive tissues). Here, the Keratocytes (specialized cells) secrete Collagen and proteoglycans, needed to maintain clarity and curvature of cornea. The 3rd innermost layer, called endothelium or, Descemet’s membrane. This is a single cell thin layer, responsible for regulating the pressure of aqueous humour keeping the cornea transparent.

The “Iris” works like a shutter in a camera and has the ability to get enlarged & shrinked, depending on the intensity light which is entering the eye.

After passing through the iris, the light rays pass through the eye’s natural biconvex and crystalline lens. The function of lens is also similar to that of a camera lens whose thickness is so designed as to make the encident light rays focus on retina properly.

After  crossing the lens, the light rays pass through a dense, transparent gel-like substance, called the vitreous humor which is filled in eyeball and helps the eye to hold its spherical shape.

In a normal eye, the light rays come to a sharp focusing point on the retina. The retina functions much like the film in a camera. The cornea is somewhat curved structure, having transparent surface. If the light rays, entering the eye from different angles, focus on different points (instead at one point) on retina, a blurred or, distorted image is perceived.

The retina receives the image that the cornea focuses through the eye’s internal lens and transforms this image into electrical impulses that are carried by the optic nerve to the brain. We can tolerate very large scars on our bodies with no concern except for our vanity. This is not so in the cornea. Even a minor scar or irregularity in the shape can impair vision. No matter how well the rest of the eye is functioning, if the cornea is scarred, clouded or distorted, vision will be affected.

There are two types of photoreceptors in the human retina, rods and cones.

Rods are responsible for vision at low light levels. They do not differentiate the colors and have a low spatial acuity.

Cones are responsible for vision at increased light levels and color perception. They are found concentrated in macular region.

The uvea is a layer of tissue beneath the white of the eye (sclera). It has three parts: the iris, which is the colored part of the eye; the choroid layer, which is the layer of blood vessels and connective tissue between the sclera and the retina; and the ciliary body, which secretes the transparent liquid (aqueous humor) into the eye.

The fovea is responsible for sharp central vision in the retina of the eye where visual accuracy is highest. The centre of the field of vision is focused in this region, where retinal cones are particularly concentrated.

Human eyes help provide a 3-d, moving image, normally colored in daylight. The rod and cone cells in  Retina allow conscious light perception and vision including color differentiation and the perception of depth as well. The human eye can differentiate about 10 million colors and is possibly capable of detecting a single photon on the other hand.

SYMPTOMS OF AN EYE PROBLEM:

The eye is a highly sensitive sense organ and may manifest a number of symptoms in case of any eye disease. The following is a list of some common symptoms which should not be neglected and warrant an immediate eye check-up by a trained practitioner.

Redness without any known factor, persistent Itching, Burning sensation with any known etiology, Continuous watering, Inability to read from a distance, Pain while driving, reading or concentrating anywhere, Blurred vision, Visualization of white or black spots where there aren’t any abnormality seen in the eye.

The following is a list of some common symptoms and diseases, related with Eyes:

Conjunctivitis: It is caused by the bacterial infection and inflammation in conjunctiva membrane.

Cataract: It is age related disorder which may occur after 50 yrs due to increase of opaqueness in lens.

Glucoma: It is a non curable disease which may occur at any age due to excessive pressure of optical fluid, causing adverse affect on optical nerves. Once the nerves are damaged, the person may be blind for ever. Hence, the only option to avoid progressive growth of Glucoma, is to use regular medicines, as prescribed by Doctor, in order to regulate and control the optic pressure of Eyes. Despite, the fact that Glucoma is non curable, but, one can control it to live with healthy eyes by regular check ups and follow up with Doctor.

Retinopathy: It is an infection or, inflammation in retina, causing impairment or loss of vision.

Dry eye syndrome: It occurs due to dryness and inflammation in cornea, also known as Keratitis.

Photophobia It is sort of irritational fear due to exposure of light. It is not a morbid fear.

Amblyopia: It is disorder in which the brain and eye does not work in coordination with each other. Such eye is also called lazy eye.

Keratoconus: It is progressive thinning of cornea which may cause vision impairment.

Diplopia: It is commonly known as double vision where, the simultaneous perception of two images of a single object is experienced, which may be displaced horizontally &/or,vertically.

Red eye: It is caused by swollen or dilated blood vessels.

Eye injury: It may be minor or,major. The soap or any irritable substance, in eye, may also damage eye.

Stye: It is an infection which causes tender red lump on eyelid.

Trachoma: It is called granular conjunctivitis, causing roughening of inner suface of eyelid.

Chalazion: It is a small bump, similar to stye, that appears on the eyelid because of a blocked oil gland.

Corneal dystrophy: It is accumulation of abnormal material at outside of eye.

There are mainly 4 vision defects, namely:

Myopia (short sightedness) where, the image is formed before Retina due to increase in thickness of lense and/or, curvature of cornea. It is corrected by putting concave lens in specs. 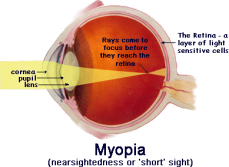 Hypermetropia (Long sightedness) where, the image is formed ahead of Retina due to decrease in thickness of lense and/or, curvature of cornea. It is corrected by putting convex lens in specs.

Astigmatism where, the image after refraction from cornea and lens, focuses in different planes at different points on Retina.

Presbiopia  where, the image is formed behind the retina due to ageing and stiffness of lens, causing blurred vision.

Eyes are complex organs with a number of tests to assess different functions, such as:

There are different therapies to cure eye related diseases like Allopathy, Homoeopathy, Ayurvedic etc. Now, it depends which therapy you prefer in your case. But, the treatment is very important because no one would like to afford the vision loss or, any impairment in eye.