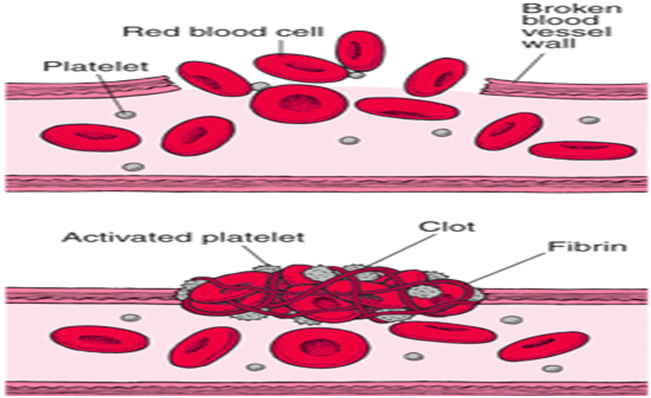 The blood consists of nearly  45%  of  cellular elements, including RBC, WBC and Platelets (Thrombocytes) and remaining 55% is a fluid, called Plasma (straw coloured).

Serum and Plasma are both straw coloured fluids, with the only difference that the Serum excludes clotting factors of  blood. If blood is allowed to clot in a test tube, then the clot forms (consuming the Clotting factors) at the bottom and Serum remains at the top.

What is Blood clotting and why it is needed in our body:

The Blood clotting is also called Blood coagulation. It means the change of  blood from a liquid to colloidal form, called Gel, thereby forming a clot which prevents the further loss of blood from body.

The blood clotting is a natural and preventive physiological process of our body which takes place in the event of any injury, where, the blood vessel(s) ruptures.

How does the Blood coagulate / clot:

First of all, the Platelets are activated which changes their shape immediately from round to spiny. Then, the Platelets stick to each other and with broken vessel and begin to plug the leaking point of  blood vessel.

There is an enzyme, called Factor X which is synthesized in Liver with the help of Vitamin K (responsible for Blood clotting) whose deficiency causes Hemophilia in body. FactorX plays a key role at several stages of the Blood clotting process. The half life of  Factor X is 40–45 hours.

However, to balance blood clotting, nature has provided certain anticoagulants also which inhibit the clotting process by preventing the action of  Factor X in various degrees. Some of anticoagulants are Warfarin and Heparin etc.

Factor X, activated by hydrolysis, is the first member of the Thrombin pathway. It acts by splitting Prothrombin in two places which yield the active Thrombin.

The Thrombin, being a principal enzyme for homeostasis, is  found in blood which catalyses and converts the  Fibrinogen (remains inactive) into Fibrin (active form of Fibrinogen) which traps RBCs and Platelets to form the clot. The Fibrin, radiated from the clumped platelets, forms a net which entraps more platelets and blood cells. The fibrin strands participate in developing the clot and help to hold it in place to keep the vessel wall totally plugged.

The reactions which take place during blood clotting are balanced by other reactions which stop the clotting process. This is again a wonderful natural phenomenon or, control system in our body to make clot and also to dissolve the clot on the other hand otherwise, a minor blood vessel injuries could trigger the clotting throughout the body.

It is, therefore, seen that only the needful reactions take place during clotting and during dissolving the clot on requirement basis, thereby balancing the system.

The complete blood clotting takes around 6 hrs and the injury is recovered in 3 weeks.